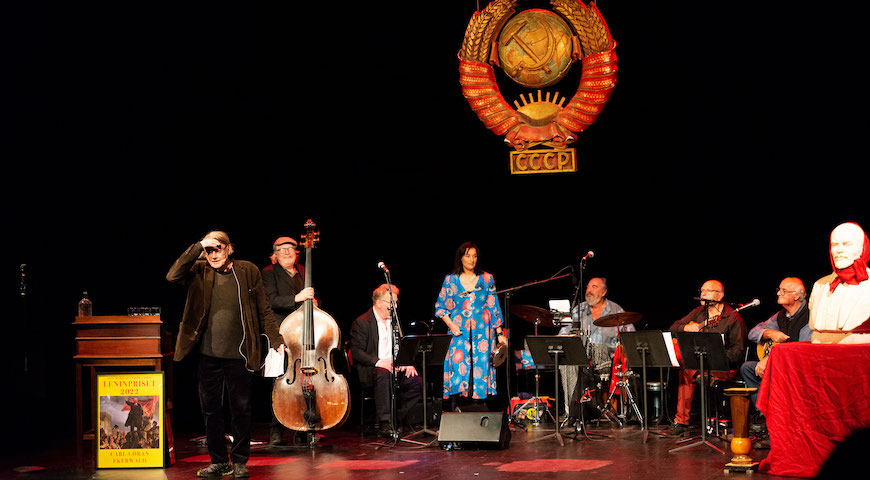 Before the award ceremony began, the usual mingling took place in the foyer of the theatre. An exuberant Carl-Göran Ekerwald made his entrance well in advance of the award ceremony, and the 98-year-old author was no less happy when he got to see for the first time his new collection of poems, Kallhamrat, which had just come from the printing house. The newly published book and about ten other titles were for sale for the benefit of the Jan Myrdal Society and Carl-Göran happily signed books for the many book buyers.

After a musical intro in the form of an instrumental potpourri, Lasse Diding started this year’s award ceremony. In his introductory speech, Lasse described the award ceremony as an act of resistance in bad times with rampant climate threats, a government run by Sweden Democrats and nuclear weapons threats. To make a mark against an unequal distribution of attention regarding wars and conflicts in the world, an extra Lenin Award of 50,000 SEK was awarded this year, which is distributed equally between the war victims in Ukraine and Yemen. (Read more about it here.) 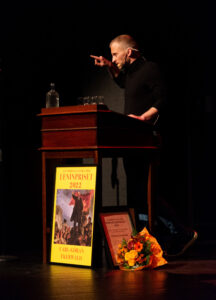 Lasse further talked about the decision to let the awards regain Jan Myrdal’s name (read more about it here) and also mentioned that the grand book about the Jan Myrdal library is now finally, after years of waiting, soon to be in print. Among many others, this year’s Lenin Award laureate Carl-Göran Ekerwald has contributed a chapter to the book.

As usual, the award ceremony then began with Jan Myrdal’s small prize – the Robespierre Prize, whose prize money had been raised to 25,000 SEK from this year’s prize onwards. Lasse Diding gave a background to this year’s laureate, Aleksej Sachnin, and talked about how the announcement of this year’s prize winner was delayed until the last minute since Aleksej fled Russia in the autumn and has now sought asylum in France. After Lasse had read out the justification, it was time for the 2021 Robespierre Prize laureate Kalle Holmqvist’s speech, in which he put the choice of this year’s prize winner in a historical perspective. Unfortunately, Holmqvist could not be there at Varberg Theatre, but a pre-recorded video of his speech was played.

In his acceptance speech, Aleksej Sachnin described, among other things, the flight a few weeks earlier out of Russia to Kazakhstan and how the usually deserted road across the steppe was now filled with a several kilometres long queue of cars. In the cars sat Moscow’s and Saint Petersburg’s fleeing well-to-do middle class, and Aleksey talked about the strong antagonism that exist today between this group and the poor Russians who do not have the same possibility to leave the country.

Before it was time to move on to Jan Myrdal’s big prize – the Lenin Award, there was a musical interlude. The Lenin Award’s own bandleader Bosse Stenholm was this year joined by Stefan Abelsson, Stefan Engberg, Evangelos Vlavianos, Georgios Anastasiadis and guest artist Maria Stellas. The theme of the day was Greek music and in particular the resistance man Mikis Theodorakis, who was actually awarded the Soviet Lenin Prize in 1983. 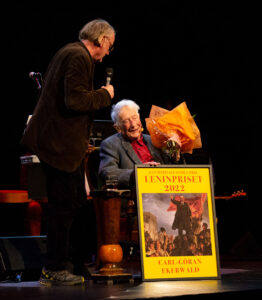 Lasse Diding began the awarding of Jan Myrdal’s big prize – the Lenin Award by pointing out that it was the first and probably the only time the award goes to a laureate who lived at the same time as Lenin and then gave a background on Carl-Göran Ekerwald’s long life and voluminous authorship. Lasse also described his own first meeting with Carl-Göran, which took place in 2012 when Lasse sought out the then 88-year-old favorite author to shake his hand before it was too late. At this meeting, Carl-Göran described his many future projects and Lasse thought it sounded a bit too ambitious, as statistics show that 90-year-old authors publish, on average, zero additional works during the rest of their lives. But Carl-Göran defies the statistics and from the deep kleptomaniac pockets of the corduroy blazer, Lasse now on stage picked out one by one the more than 10 books Ekerwald has written since the meeting in 2012.

Lasse then read out the justification, which he also likened to a declaration of love to Carl-Göran Ekerwald, before it was time for last year’s Lenin Award laureate Nina Björk to give a speech. In her speech, Björk highlighted, among other things, Ekerwald’s blood-filled humanism and made the analysis that a fundamental question in his writing could be “How should we live?”

Lasse Diding brought out a comfortable armchair on stage when it was time for Carl-Göran Ekerwald to speak. As a thank you for the Lenin Award, Carl-Göran had written the essay “The holy feeling of revolt” and it formed the framework of his magnificent acceptance speech before a devout audience at the theatre.

The award ceremony ended as usual with all the present laureates gathering on stage for a sing-along in the Internationale. The day’s program continued with a member meeting for the Jan Myrdal Society at the theatre before it was time for the evening’s festivities at Hotell Gästis. After dinner and cake, there was more live music by Maria Stellas and the band, who continued and deepened the Greek theme. There was a sing-along as well as dancing and the party lasted into the wee hours.

See the award ceremony in its entirety here:

Lasse Diding looks out in the audience at Varberg Theatre. Photo: Olle Asp

Carl-Göran Ekerwald in the foyer of the theatre before the award ceremony.

As usual, Lasse Diding was the master of ceremonies at the award ceremony. Photo: Olle Asp

Kalle Holmqvist could not be there, but participated through a pre-recorded speech. Photo: Olle Asp

Lasse Diding takes out books by Ekerwald from the pockets of his corduroy jacket. Photo: Olle Asp

Gathering on stage before the finale with the Internationale. Photo: Olle Asp

Closing song with this year's and previous laureates on stage along with Carl-Göran Ekerwald's daughters. Photo: Olle Asp

The traditional ending with the Internationale. Photo: Stefan Johansson / HN