The 2021 award ceremony was an extraordinary grand event with double laureates, many well-formulated speeches, and a high party spirit.

As usual, there was a lot of people and full commerce in the foyer of Varberg Theatre well before the award ceremony started. The visitors mingled and flocked around the various book stands, where of course the sales and signing of Kajsa Ekis Ekman’s and Nina Björk’s books were at the centre. Many wanted a dedicated copy of the laureates’ latest work On the existence of gender and If you love freedom.

The theatre was crowded of course, and an extra excited atmosphere settled in the room when the spectators took their seats for this double award ceremony. Most things on stage were as usual, with Lasse Diding as master of ceremonies and Lenin wearing a headscarf, but this time also in the company of one of the garden elves known from the film Waiting for Jan Myrdal’s death and the Karl Marx statuette Lasse Diding brought with him during the autumn launch tour for the just mentioned film.

Lasse Diding began the award ceremony with a minute’s silence for those who have left us since the last award ceremony in the spring of 2019: Jan Myrdal, Sven Lindqvist, Maj Sjöwall and Sven Wollter. Afterwards, previous laureates who were present and very much alive were given an extra warm welcome. Former Lenin Award laureates Mikel Wiehe, Mikael Nyberg and Göran Therborn as well as former Robespierre Prize winners Daria Bogdanska and, in fact, Kajsa Ekis Ekman who was the first to be awarded the Robespierre Prize in 2010. After complete information from Lasse about the weekend’s extensive program, the house band Jonsereds Proggorkester with Bosse Stenholm in the lead kicked off the actual award ceremony with the obvious signature melody The Lenin song by Ernst Busch. The band, which in addition to Bosse consisted of Stefan Engberg, Magnus Ekman and Stefan Abelsson, then played a song between each award and this year they had an Irish theme which in addition to two Irish tunes included Fred Åkerström’s The Thirtieth of January Seventy-two.

After Lasse Diding read out the justification for the 2020 Robespierre Prize to David Ritschard, the 2019 laureate Daria Bogdanska gave a speech in which she praised David’s ability to portray everyday life, emotions, romance, solidarity, hope and dreams in his lyrics. Daria also thanked David for filling a void after the sometimes overused progg songs from the 70’s, after which David Ritschard received his award.

Then it was time for Kajsa Ekis Ekman to finally receive her Lenin Award for 2020 and here too Lasse Diding read out the justification, before the 2019 laureate Professor Göran Therborn took the stage. In his speech, Therborn talked about a new international left-wing generation that sprang from the failed neoliberalism and highlighted Kajsa Ekis Ekman as its foremost intellectual representative. 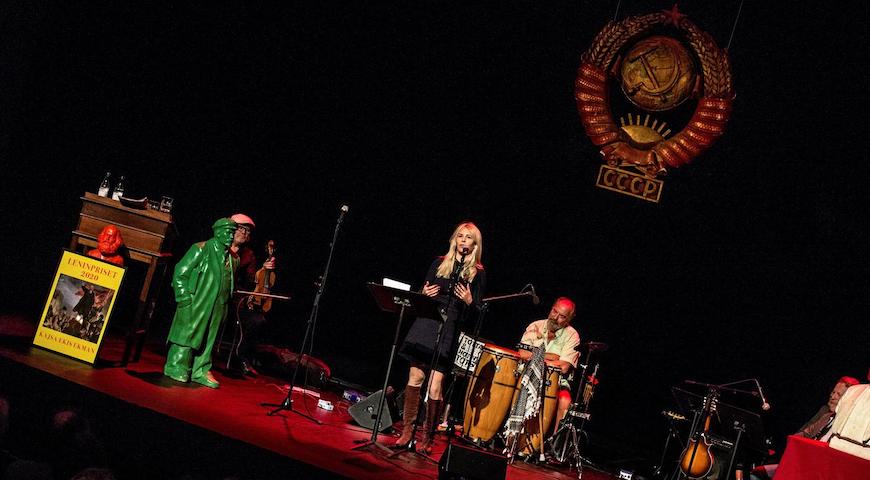 In her acceptance speech, Ekis took her starting point in childhood and thanked first and foremost her father, who was also present at the theatre. She also talked about how it is impossible to predict the future because it is people who create history, that all situations carry the seed to their own opposite and that all oppression breeds resistance. Linked to this, she also mentioned how impossible it was to predict how controversial classical feminist positions would be today. In her thanks for the Lenin Award, Ekis also extended an extra thank you to Lasse Diding for the quiet workplace Hotell Havanna constituted, without which she could not have written her last two books.

After a musical interlude, it was time for the 2021 laureates. Lasse Diding read out the justification for the Robespierre Prize to Kalle Holmqvist, after which David Ritschard gave a speech in which he emphasized the kinship between himself and Kalle Holmqvist when it comes to focusing on the common man. He also highlighted the breadth of Holmqvist’s work. Kalle Holmqvist then gave an acceptance speech in which he mentioned three people who have been particularly important to his writing: Jan Myrdal, Sven Wernström and Maria Sandel.

Lasse Diding read out the justification for the 2021 Lenin Award to Nina Björk and then it was time for Kajsa Ekis Ekman to speak again. Ekis highlighted, among other things, Nina Björk’s courage, her ability to write about difficult things in a simple way, her pioneering thinking, and her ambition to reach an in-depth understanding rather than win a debate. 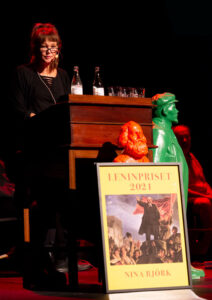 Deeply moved by Ekis’ speech, Nina Björk then received her Lenin Award and gave an acceptance speech in which she focused on the key issue of our time, the climate threat and its connection to human activity and our capitalist system, but also in a more positive spirit described her belief that the socialist dream of real equality “cannot be obliterated as long as there are people on earth”.

After the award ceremony was over, it was time for an open member meeting for the Jan Myrdal Society at the theatre and at 5 pm there was a well-attended world premiere of the film Myrdal 92 in the same premises. Alexander Larsson’s documentary delves into Jan Myrdal’s last year working as a 92-year-old writer and allows Myrdal to finish speaking.

In the evening, there was a traditional Lenin Award party at Gästis Kafé & Matsalar, which was packed to the last seat. David Ritschard and the seven-member band Krokodiltårarna treated the party guests to a fantastic show where they mixed the Ritschard compositions from their two latest albums with well-chosen covers for the occasion such as Wiehe’s Huddinge, Huddinge and Knutna nävar’s Lär av historien.

The weekend’s events ended on Sunday morning with a screening of the cinema version of Waiting for Jan Myrdal’s death at Gästis Kafé & Matsalar and about fifty who had not yet seen the film attended.

Nina Björk and Kajsa Ekis Ekman signed books in the theater's foyer both before and after the award ceremony. Photo: Håkan Johansson / HN

As usual, Jonsereds Proggorkester stood for the entertainment at the award ceremony. Photo: Olle Asp

A traditional ending with the Internationale. Photo: Olle Asp